The authors discuss the role of Higher Education in facilitating desistance from offending.

It is often the case that those entrenched in patterns of offending find it difficult to stop due to stigma, discrimination and other structural issues limiting opportunities to bolster aspiration (Ministry of Justice; Shapland & Bottoms). Several studies have concluded that studying within Higher Education (HE) can be a significant ‘hook for change’ offering development of personal agency and widening positive social networks, key factors towards desistance   (Lockwood et al., 2012; Runnell, 2017).

Yet, despite widening access to HE being a global endeavour (Evans et al., 2017), the Prison Education Trust highlight that HE can feel unwelcoming for those with a criminal record. Evans et al (2017) found that despite a drive to widen participation and access to HE in Wales, the internal culture and narrative can become ‘entangled’ re-enforcing the status quo at the expense of developing non-traditional student participation such as adult learners. Evans et al (ibid) conclude more needs to be done to assure greater equality across all demographics of society. We were therefore interested in how HE might be considered a useful public criminology approach for crime avoidance and support marginalised groups to reach their full potential.

This Blog shares our research carried out in Swansea, Wales which was funded by the Society for Research into Higher Education. The project explored the aspirations, barriers, and challenges for those at risk of offending to study in HE and considered what might be needed to support the desire to desist from offending within the context of a HE setting.  The project brought together academics, third sector and statutory agencies and most importantly we worked with those at risk of (re)offending as partners by carrying out research through ‘doing with’ rather than, ‘researching on’.

The data collection phase consisted of two engagement events. One for those that had offended or were at risk of offending and were members of our partner and host organisation ‘The Hub’ (n = 16) and the other with practitioners who worked with people at risk including two participants who were also studying at Higher Education and had offended (n = 10).

We adopted a Pictorial Narrative Approach as a data collection tool and community engagement activity which captures participant’s narratives in a visual manner using drawings, words and symbols and offered immediate triangulation and increased trustworthiness of the findings (Glaw, et al., 2017) through a focus group format.  The research produced interesting data with common themes across both groups.

Aspirations varied but everyone wanted to be happy and ‘get back on track.’ A common desire was to ‘sort my head out’ and have better mental health and well-being which was seen as a ‘daily struggle.’ 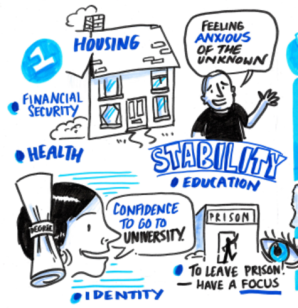 Several people stated getting back on track in life meant getting a job with some wanting to use their own experiences to help others. The two most dominant aspirations related to positive family ties and relationships, and employment and these were often offered together. Getting back on track related to feeling secure and notions of home, family, health, employment and money. Such aspirations are key drivers to desistance (McNeill) and might be the necessary pre-requisites before any consideration can be given to embarking on HE. However, one of the more concerning factors that came through in the data was the haunting experiences of previous education.

Indeed, 12 of the 16 participants in the first focus group reported negative experiences, and like a ‘lost soul swimming in a fish bowl’ with loneliness and isolation a difficult past experiences to overcome. Many also recounted the negative learning experiences within the classroom related to ‘getting the answers wrong’ and being ‘told off’ and ‘sent to the back of the class.’ This left many feeling publicly embarrassed, intimidated, seen as a problem and not wanting to engage in future learning. All participants stated that they felt they had not been given a fair chance.

Ten participants identified learning difficulties as a barrier to education and that their behaviour led to exclusion. A common theme was bullying experiences within education from both teachers and peers. Ultimately this meant that most had feelings of alienation and resentment towards primary and secondary school and that it didn’t meet their needs.

Most participants had experiences of child and teenage abuse (neglect, physical and ‘dark’ stuff) and had been within the care and or criminal justice system during primary and secondary education and that due to all of this they were not ready for education.

However, for participants who had been to prison, it was often ‘the beginning of their education’ where they found hope and aspiration. Prison education was viewed as offering opportunity to develop basic skills such as reading and writing and for one participant it offered the chance to pursue a higher level of educational attainment which they pursued at University on release from prison.

Most participants identified university as marketing itself as a vehicle for gaining employment but really ‘just wanted the money.’ Three of the participants in the first group had attended university and felt the level of debt acquired during a degree was excessive and there were no guarantees that it would lead to a job.

One participant who studied Drama at university, said he had been promised the degree would lead to future opportunities but the course kept changing throughout and he felt let down by the institution.

There was a general mistrust of university and people that worked there and that the university was out for itself and getting money and that it viewed people like them in negative ways and didn’t always support future employment.

There was recognition however that university could help people gain confidence and improve their well-being. One participant reported, ‘I applied for university but they rejected me because of my conviction, only drink related offences mind you, but they rejected me anyway but even when I walk across the campus now I feel proud and it makes me walk with my head heal high – the university has a good vibe about it’.

Participants felt that universities need to develop inclusive environments that widen access and offer opportunities to those with a criminal past.

Barriers reported by the participants focused on funding, judgment, mental health and stigma due to their previous criminal conviction(s).

All participants from the first group were claiming benefits and felt university was completely out of reach and that the debt associated with going to university wasn’t worth it. Many of group do not have access to transport so simply paying public transport fares was viewed as out of their reach most of the time.

The participants reported that they felt their convictions would prevent them from going to university. One participant reported that he had been told that he needed to be ‘clean from drugs for two years before I can start doing courses, it’s really fucking hard’. Another participant articulated the views of the group when he said, ‘if you have the money they’ll take you but not if you have a conviction’.

The expression of isolation and stigma associated with a criminal conviction was overwhelming for this group and that university ‘didn’t want someone like me’ due to this. The group did want to access HE but the thought of entering into an institution was overwhelming. The words used included ‘scary’ ‘intimidating’ ‘big.’

They expressed a desire for a new type of HE which focused on delivery to them in their community setting, supported by workers who understood their background and specific needs.

A few participants felt that if they were not treated appropriately in respect of their background and needs, they would likely get angry, frustrated and harm their confidence.

So what does this mean and what can HE do to actually be more supportive of potential students with offending backgrounds and really be a widening access environment? We believe that there are some very clear opportunities that HE could offer to support people who have offended, or are at risk of offending, and these include:

We are working on developing such initiatives in Swansea as well as applying for more funding to research this exciting and emerging area on desistance and HE.